By jdfulmer | Published June 5, 2013 | Comments Off on Left-handed Dogs 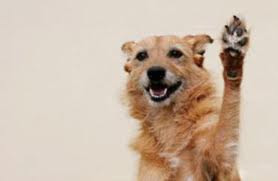 Do you have a dog who tends to exhibit aggressive behavior toward strangers? Is he a South Paw? Believe it or not, those traits are related.

According to a new study from the University of Adelaide, left-handed dogs are more likely to display aggression than right-handed or ambidextrous ones.

Dr. Luke Schneider, one of the study’s authors,  told the Telegraph, “We found that dogs with a preference for left paws were reported by their owners to show high levels of aggression towards strangers. The left-pawed dogs scored almost twice as high as ambilateral [ones with no preference] and also higher than dogs with right paws.”

It appears this correlation also applies to dogs.

Left-handedness is far more prevalent in dogs than humans. Seventy-five dogs were used in the study and about 1/3 were determined to be south paws. None of the dogs in the test group were characterized as aggressive animals. Lefties were simply more pushy than righties.


By jdfulmer | Published June 4, 2013 | Comments Off on There Are Penguins In Danger!!! Dogs To The Rescue 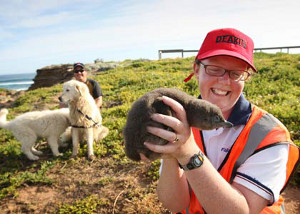 In 2006, things looked pretty dire for the penguins of Australia’s Middle Island. A once thriving colony had dwindled from over thousand down to four remaining penguins. The population had been decimated by the introduction of foxes to the mainland.

These new predators had developed a taste for baby penguins. They would swim across Stingray Bay at low tide and gorge themselves on the helpless creatures. Conservationists tried a variety of ways to stop the foxes but nothing seemed to work. It seemed like only a matter of time until the foxes destroyed the penguins of Middle Island.

In 2006 — with the population down to just four birds — conservationists introduced a pair of Maremma sheepdogs to protect the flock. The dogs were specifically trained to protect penguins rather than sheep. After some initial hiccups, they performed their jobs spectacularly.

The skittish penguins soon got used to the dogs; the foxes did not. The Maremmas have kept the penguins safe from predators and the population has started to rebound. The island now contains at least 200 pairs of happy feet.

According to Live Science, Australia has a dubious history of using one species to protect another. Fortunately, failure didn’t deter them. The Maremma guard dog project has been so successful, it’s now employed at nearby Point Danger to protect gannet birds. In 2010, the project received an environmental award from the Australian government.


By cmrineer | Published January 4, 2013 | Comments Off on Reading…now with dogs!

The Washington Post recently reported on a trend developing in libraries in Virginia – reading to dogs.

As the post reported, “A growing number of libraries and some schools in the region are inviting volunteers to bring their dogs in to help children learn, hoping the pets will calm children who are struggling, excite those who are bored and help kids equate reading with fun.”

The program is the creation of Cynthia Power, a teacher at Ashlawn Elementary School in Arlington County and a volunteer with People Animals Love, or PAL, a D.C. nonprofit group that brings well-mannered, friendly dogs to nursing homes and other places.

“Children never get a chance to read without someone telling them they mispronounced a word or skipped part of the story,” Power said. “We don’t give children that chance to just enjoy reading.”

Children interviewed by the Post include those with disabilities, those who are just learning English, the shy, and the dog-crazy (who isn’t?).


By cmrineer | Published January 3, 2013 | Comments Off on No Bulldog Left Behind

Southern California Bulldog Rescue (SCBR) recently acquired 12 English Bulldogs from a garage in Los Angeles County. Acting on a tip, authorities from the Los Angeles County Department of Animal Care and Control (DACC) found the dogs in unsanitary conditions. They were part of an illegal breeding operation. (To avoid backyard breeders and puppy mills, see our tips on finding a bulldog.)

The dogs join 70 other English bulls that are currently in the care of SCBR. As a result of their owner’s neglect, the 12 additional dogs will require rather extensive medical care. SCBR estimates it spends $15,000 a month caring for the dogs it currently has.

Now the good news, these dogs are adoptable, “One of the tragic things about backyard breeders is the manner in which they house and keep their animals. It is often times very inhumane and their primary goals are financially driven,” County of Los Angeles Department of Animal Care and Control Deputy Director Aaron Reyes said. “These animals do need care and do need to be socialized and exercised. We’re happy to say they’re a very well-mannered bunch, just unfortunately, a neglected bunch.”

You can help by donating to the SCBR through Crowdrise. All donations are tax deductible. Here at Where’s Pom, we’ve already donated. We can’t leave a bulldog behind.


By jdfulmer | Published January 2, 2013 | Comments Off on ASCII Bulldog

ASCII art is a computer drawing technique that was first utilized in the late ’60s and early ’70s. Its popularity increased in the 1980s as bulletin boards connected people across the globe. In order to convey imagery on text based terminals, creative minds “drew” pictures with the ASCII character set.

While the most popular example remains the humble emoticon, some ASCII art can be quite elaborate. There are plenty of characters with which you can draw lines and shapes. And the busiest characters can be packed together to create elaborate textures. At Where’s Pom?, there’s really only one piece of ASCII art we care about. The English Bulldog:


By jdfulmer | Published January 1, 2013 | Comments Off on Dogs and Toy Helicopters 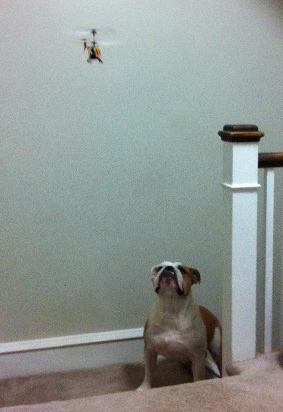 A Facebook friend bought a toy helicopter and posted pictures of it flying through his house. My first thought was this: That’s quite an engineering marvel. Too bad we don’t apply that type of technical savviness to the conquest of humanity’s most pressing needs. My second thought was this: That will really mess with the Pom’s head. I bought a helicopter.

When Pommie first encountered the helicopter, he didn’t know what to think. He kept his distance as well as a vigilante watch. If the helicopter drew near, the Pom backed away, his eyes fixated on the flying machine. A steady stream of barking let the neighbors know something was up.

In time, Pommie grew more daring. That stinkin’ flying contraption was becoming ever more annoying. He started to cop an attitude. After a couple days, the Pom had had enough. He was determined to take it out. When the copter grew near, he seized the moment and attacked. The copter won. It’s plastic blades clipped him in the snout.

Do you remember in Monty Python and the Holy Grail when the knights retreated? “Run away! Run away!” That was the Pom when he was clipped by a plastic rotor. I’ve been clipped myself. It’s far more startling than painful. In fact, it doesn’t hurt at all. The rotors are hinged to minimize their impact and protect them from breaking.

In the wake of his failed assault, the Pom and the copter have reached a mutual understanding. If the copter flies on the first floor, he leaves it alone. If it flies on the second floor, he’s gonna bark at it. He won’t attack it, but it’s gonna get a good barking. And maybe a fake attack just to see if it will flinch.


By jdfulmer | Published December 19, 2012 | Comments Off on Doggy Intelligence

When it comes to finding creative ways to extract treats from us, Pom is probably the smartest animal on earth. He’ll go outside to fake a pee because we’ll probably reward him. He’ll use an arsenal of cute faces in order to get a empathy treat. And he’ll do unprovoked training tricks because we gave him treats in class. His creativity knows no bounds yet, according to the Internets, Bulldogs are the 8th dumbest dog on earth.

If you google smartest dogs and dumbest dogs, you’ll find a variety of sites that reproduce a similar list. These lists are widely reproduced but rarely attributed. I traced the source to Professor Stanley Coren from this article in the Telegraph. While Coren was widely featured in the article it wasn’t clear if the smartest and dumbest lists were produced by him.  I was able to track him down through his university page and he directed me to this article in Psychology Today.

In the article, Coren distinguishes different types of intelligence. There is instinctive intelligence, which refers to the execution of tasks for which a dog was bred, i.e., herding, hunting, etc. There is adaptive intelligence which describes a dog’s ability to solve problems and adapt to his environment. Finally, we have working and obedience intelligence which Coren describes as the closest thing we have to school learning. It was from this measure that Coren constructed his lists. The rankings were based on results from judged obedience tests. You can find them after the jump.

END_OF_DOCUMENT_TOKEN_TO_BE_REPLACED 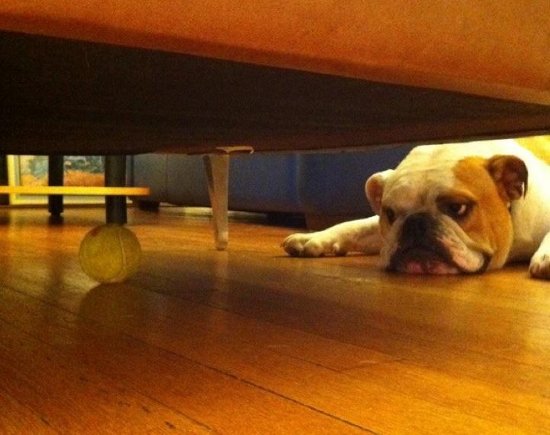 Just out of reach…. 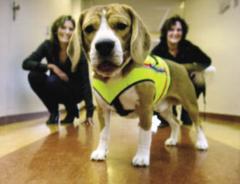 Last week we wrote about Migaloo, a Australian canine archaeologist  She was taught to sniff out ancient bones so that paleontologists can better understand the peopling of Australia. Today we learn of a dog that was enlisted in the fight against infectious disease.

Meet Cliff, a two year old Beagle from the Netherlands. Dutch doctors recruited him in the fight against Clostridium difficile.

That bacteria is routinely referred to as “C. diff” and it is a scourge of hospitals world wide. The bacteria forms heat-resistant spores that are insusceptible to alcohol based hand cleansers and routine cleaning. In the US alone, 14,000 people die each year from exposure to C. diff. Thousands more suffer from its symptoms.

Doctors spent several months training Cliff to lie down or sit whenever he smelled C. diff. The results were pretty astounding. In a controlled experiment Dr. Cliff was taken on ten trips through a hospital where he was exposed to patients who carried the infection and patients that did not. Cliff’s handlers were not told who was infected. The canine investigator was able to identify the presence of C. diff 83% of the time.

The results were published in the British Journal of Medicine. 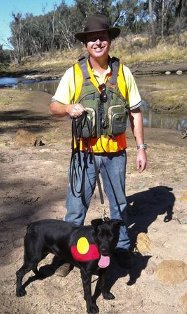 It’s well known that dogs are man’s best friend. Homo sapiens and Canis lupus have lived together for at least 15,000 years. During that time, dogs have contributed to the well-being of the family. They’ve guarded our homes, herded our livestock, helped our disabled and policed our streets.

Due of their excellent sense of smell, dogs make great detection animals. They been used to ferret out illegal drugs, explosives, criminals and honey bees. Biologists have been using them as conservation dogs to sniff out different species, invasive plants and even whale poop. Now from Australia we learn that a dog handler has trained the world’s first canine archaeologist.

Gary Jackson of Multinational K9 has trained a black lab named Migaloo to hunt for human bones that are centuries old. Like most dogs, Migaloo loves to play ball. Jackson used this in her training. After he acquainted her the smell of ancient bones, he taught her that she can only have her ball if she targets the odor. Migaloo became an obsessive archaeologist.

Now, I just have to bounce the ball a few times and say: “D’ya want this? Find.” She’ll go out and start sniffing like a hyperactive kid, and before long she lets me know: “I’ve got something!”

This may actually be a major breakthrough. The process of discovering ancient remains has always been expensive and time consuming. Now all you need is a well-trained dog and a tennis ball.